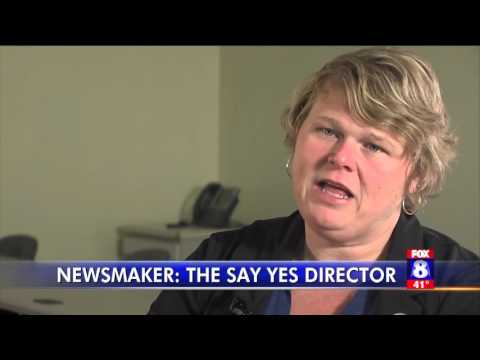 “Dream big because if you can get there, we’re going to help you.”

That’s the promise Mary Vigue is making to every student in the Piedmont-Triad’s largest school system. And she’s prepared to back it up.

Vigue is Say Yes Guilford’s executive director. She’s only been on the job a little more than three months, but she’s already working to make sure college tuition will be paid for all qualified Guilford County public high school graduates in the Class of 2016 who apply, regardless of income.

Say Yes is a nonprofit organization based in New York. It was founded by philanthropist George Weiss who, in the late 1980s, promised 112 sixth graders in Philadelphia he’d pay their college tuition if they graduated high school. Today, Say Yes helps entire communities make similar commitments to every public high school student.

Thanks to seed money from Say Yes along with $35 million in contributions from local businesses and individuals, Guilford County is one of those communities.

Vigue got her Say Yes job after spending nearly 10 years in Greensboro City Government — most recently as assistant city manager. She was in that job when Guilford County started work to apply and become a Say Yes community.

“It inspired me to watch the cities, the county, the school system, our non-profits, our community foundations all come together on one topic and really sit at the table because in my nine years with this city, it didn’t happen often,” she said, “especially when you cross High Point and Greensboro and Guilford County.”

In a nutshell, Say Yes will provide “last dollar” tuition scholarships for Guilford County public high school graduates to North Carolina public colleges and universities. In other words, Say Yes covers tuition costs that remain after other financial aid is granted. Say Yes does not pay for room, board, books and fees.

“We have continuously been encouraging students and families to fill out and apply for all scholarships they’re eligible for because any scholarship that they get is out outside of an institution, for example, my church gives a scholarship,” Vigue says. “You know some people’s jobs give scholarships to their employees’ children. Those can be used for room board, books, and fees.”

But to qualify for a Say Yes Scholarship, seniors have to fill out the Federal Free Application for Student Aid, or FAFSA. This will eventually let them know how much financial aid they’re eligible for.

They’ll also need to fill out the Say Yes Guilford “Certification Form” which essentially “registers” them with the program and allows it to work with them as it verifies their eligibility.

To keep the program working for future Guilford County graduates, Say Yes will have to continually raise money. Right now, an endowment of $70 million dollars is the goal to keep the program sustainable. And Vigue feels good about that sustainability.

“I think long term as programs roll out as we see changes coming out of our schools, you know, better testing scores, changes in those wanting to go to college and changing cultures, more and more people are going to be like, ‘you know what, I want to be part of this,’” she said. “So I think long-term, it’s actually going to be easier to raise funds.”

Are you inspired by the goals and approach of Say Yes Guilford? We invite you to reach out to learn more about how you can get involved.