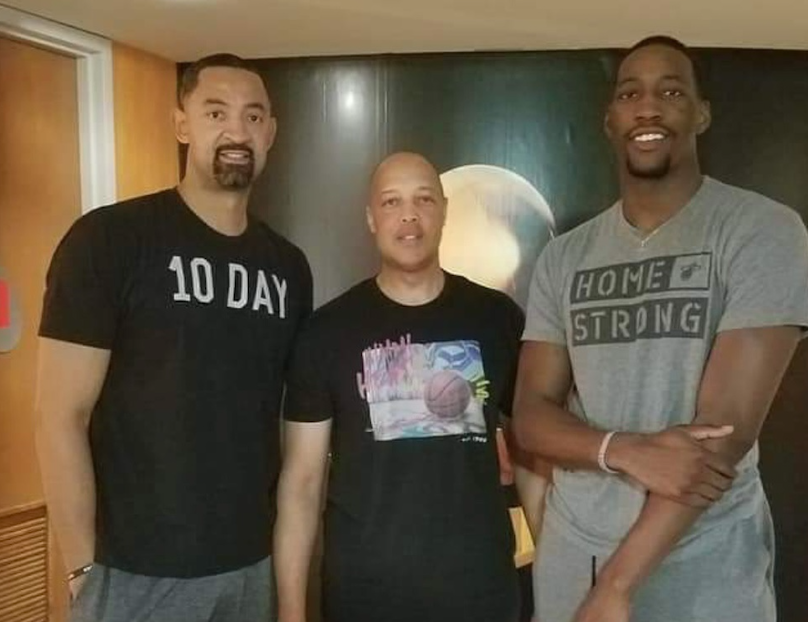 At the start of Say Yes Guilford’s Alumni for Education- Athlete story series we introduced you to one of the most talented NBA players from right here in Guilford County. Today, we are introducing you to someone who helped Miami Heat’s Center/Power Forward Bam Adebayo become who he is today.

Before becoming a trainer for some of the NBA’s basketball elite, Greensboro’s own Kevin Graves (better known as KG) also had his own famous basketball career, and instead of taking this all the way to the top decided to use his knowledge and talent to help other players chase their dreams.

“I actually started playing basketball pretty early on as a kid. In fact, I was the third leading scorer in the city of Greensboro in the ninth grade,” said Graves.

Despite early success in the sport that he loved, Graves would have a lack of focus for the educational part of his future.

“When I was in third grade, my mother got breast cancer and it really affected my focus in terms of my schoolwork,” said Graves. “It is not that I didn’t think that education was valuable, but I was rebellious and wanted to focus and work on this on my own time.”

This rebellion would keep Graves from the sport that he loved until ninth grade. “While my grades did not reflect it, I was academically gifted, but I didn’t put forth any effort because I wanted to spite my dad, who was working all of the time. When he held me back from playing the sport that I loved, because of my grades, I knew that it was time to buckle down and that is just what I did.”

Although Graves was a killer on the basketball court, going into high school changed things for Graves.

“I thought that I was going to play varsity basketball going into my Sophomore year, but this is where I ran into my first professional hurdle,” said Graves.

Working with a difficult coach during his days in high school would eventually lead Graves to pursue more support from a college coach that would give this talented athlete a new direction.

Despite only going to North Carolina A&T for his freshman year this is where Graves met the man who would change the course of his athletic career.

“When I was at A&T I met a coach, who meant the world to me. In fact, I use everything that Coach Don Corbett taught me to instruct and coach the young athletes that I work with today. He was an unbelievable coach and person, and I am so grateful for having some time with him.”

It was after this coach’s educational influence, some time at The University of North Carolina at Greensboro and an eventual move to a short career with the U.S. Air Force that Graves would finally step into a new side of the sport that he fell in love with as a kid.

“I was working at Malcolm Grow Medical Clinic at Andrews Air Force Base when I met the next person who would give me the next step in my professional career,” said Graves. “George Lawson, who is the father of former NBA star Ty Lawson, and I were playing pickup games against some of the area college teams and he eventually invited me to check out an Amateur Athletic Union (AAU) basketball game that his son just happened to be competing in along with some other famous names like Marcus Ginyard and Dante Cunningham.”

Along with spending time with the parents of these talented athletes and receiving a firsthand education about this rising star basketball program, Graves was hooked.

“About the time that I was spending time with the AAU program, I also had an 8-year-old son who was interested in basketball and I knew then that I wanted to help pass along the knowledge that I had obtained about this sport and help the newest young stars find their way.”

In order to obtain the education that he would need to continue on this new path, Graves also became a certified basketball official where he would have the opportunity to learn everything else that he needed about the game to help other young players achieve their dreams.

“I was also spending as much time as I could talking and receiving advice from Coach Corbett,” said Graves. “The truth is I never had a greater teacher/mentor than this award-winning coach and I knew that I wanted to teach and inspire young athletes the way that Corbett did.”

Thanks to all the knowledge that he received from other successful talents in the sport that he loves, Kevin Graves is now the man that we can thank for some of the best rising basketball stars on the court today. Graves’ story definitely shows us a whole new side of education itself. So, if you are passionate about something be sure to find men and women like Graves who can teach you in ways that no one else can.