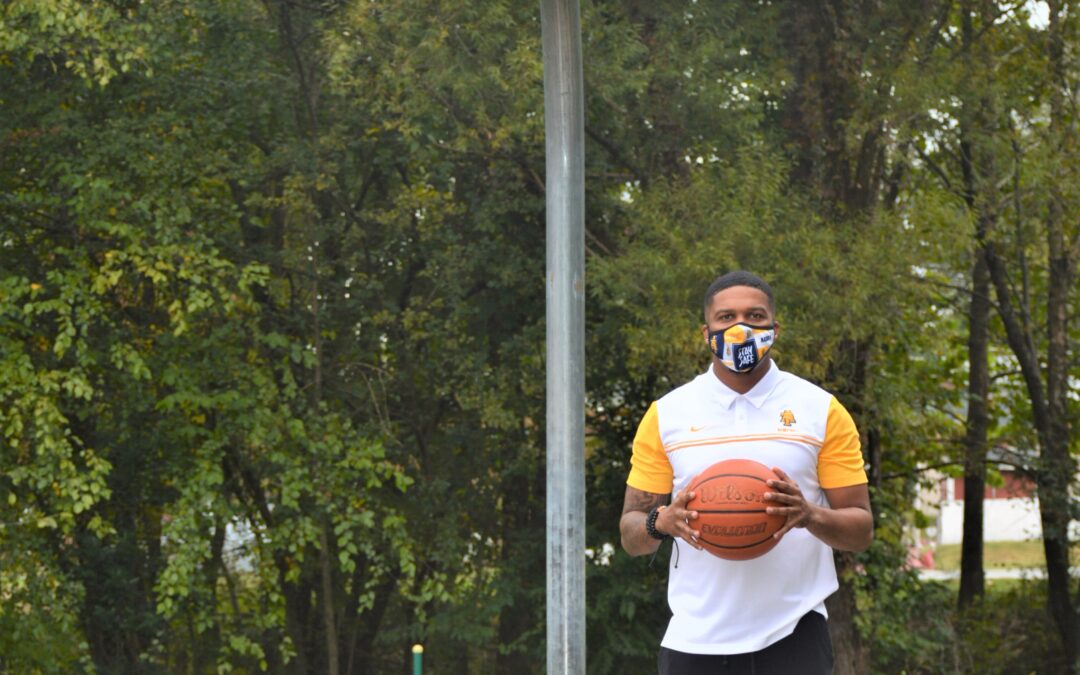 Welcome back to Say Yes Guilford’s newest Alumni for Education- Athlete story series. We are excited to continue introducing you to some of the largest athlete success stories in Guilford County and today we are introducing you to one of the most famous assistant basketball coaches in the area.

“My dad always played and coached basketball when I was growing up,” said Hunt. When I was born, he was coaching basketball at Dudley High School and as soon as I was able to hold one, he put a basketball in my hand and would even bring me to Benbow Park to have me play one on one with the older guys to find out if I had what it really took to play.”

After receiving training from his personal basketball coach; Father Kevin Hunt; throughout various basketball programs like YMCA basketball and North Carolina AAU basketball, Hunt began to see his athletic career take shape. Starting out as a standout prep star at Dudley High School, this future sports star was recruited by The Jacksonville University Dolphins Men’s Basketball Team, but it will only take one year before his dream would begin to call Hunt home. After transferring to N.C. A&T for the remainder of his undergraduate degree the born to be basketball phenom, who quickly became one of the best free throw shooters in the school’s history, began to turn the heads of some of the top college recruiters at North Carolina State where Hunt both pursued his sport of choice but also went on obtain his master’s degree.

“Although I loved being back at home with family and playing with N.C. A&T, it was always a dream of mine to play in the ACC,” said Hunt. “While I loved playing basketball, I also kept something that my dad always said in the back of my head ‘sports is 60 percent mental and 40 percent talent’ so I knew that I also wanted to get the best education possible.”

During his time as a graduate student, Hunt also had the opportunity to travel overseas to play basketball in China. Although his Plan A was to take this experience into a career in the NBA another dream began to emerge.

“It sounds crazy, but everyone usually tells people with big dreams to always have a Plan B, but I tend to say just the opposite,” said Hunt. Instead, my advice to both myself and others is to always put 110 percent into whatever your Plan A is and if things do not work out after that, take a step back and refocus on what else you can do to aspire to a new plan that may even involve your original plan, but with a new twist.”

When he returned to NC State to complete his master’s degree in youth, family, and community science, the then Men’s Basketball Coach Kevin Keatts gave Hunt a new direction in his Plan A.

“After a game against Auburn, coach Keatts approached me and told me that there was a spot waiting for me on his coaching staff when I was done chasing basketball,” said Hunt. “I knew that I eventually wanted to coach, and as my father would always say it is them before me, so I knew this opportunity was a great one, but I couldn’t help but to take a pause since it wasn’t exactly what I had in mind when I started on this journey.”

After taking a job as a graduate assistant on the coaching staff, Hunt also said that he had the opportunity to learn the skills he will need to start yet another dream – a mentorship program.

Today, Hunt has returned to his alma mater to serve as an assistant men’s basketball coach alongside Ahmad Dorsett and Phillip Shumpert at North Carolina A&T and hopes to turn this experience into one that can help others achieve their dream lives too.

We thank Sam Hunt for sharing his success story and look forward to bringing you more stories like his far into the future.